Cuban authorities broke up a prolonged hunger strike by demonstrators of the San Isidro Movement yesterday. The standoff between Cuban security forces and SIM protesters had been escalating throughout the month, 14 activists have been on hunger strike since Nov.16 demanding the release of the musician Denis Solis González, a musician arrested earlier this month. Cuban officials said they intervened late yesterday in response to Covid-19 concerns, but activists dismissed that as an excuse. Most of the protesters were detained briefly and released to their homes last night. (Reuters, El País)

Writer Carlos Manuel Álvarez had joined the hunger strikers this week, after returning from Miami, and alerted yesterday that authorities would try to leverage Covid-19 concerns to disarm the group that has been increasingly visible in internationally. (CiberCuba) The SIM is a multifaceted group that has combined art and political activism in an irreverent key in opposition to Cuban government repression. (BBC) Though it has been active since 2018, SIM has gained international prominence this month. Numerous organizations of civil society and international groups had called on Cuba's government to guarantee their safety.(Amnesty International, Havana Times)
The siege of the activists by security forces "has been read by independent media and social media, in and out of the island, as a potent gesture against censorship and the systematic repression exerted by an authoritarian state that does not permit the free realization oas such of its citizens," according to El Estornudo.
"Both the danger that the members represent and the seduction they inspire can be explained by the fact that they are perhaps the only Cubans on the island today who are living in a democracy, exotic animals that no one has seen alive in the country in 60 years," wrote Álvarez in a recent Washington Post op-ed.
News Briefs
Trinidad and Tobago
Nicaragua
Venezuela
Guatemala
Mexico
Brazil
El Salvador
Panama
Argentina
I will be off next week -- but Eduardo Romero will be sending out the Daily Briefing in my stead.
Latin America Daily Briefing
Posted by Latin America Daily Briefing at 7:46 AM No comments:

Soccer legend Diego Maradona died yesterday and the world paused for a second. In Argentina outpourings of grief and appreciation for Maradona filled streets and social media. The government declared three days of mourning, and fans are lined up in Buenos Aires' Plaza de Mayo to pay final respects to Maradona whose casket is in the Casa Rosada. The line currently stretches over seven blocks, and more than a million people are expected -- a challenge for social distancing measures that remain in place due to the coronavirus. (Infobae) The wake is reminiscent of former president Nestor Kirchner's funeral in 2010, he was laid in state in the same Sala de los Patriotas Argentinos in the Casa Rosada, as well as those of Juan Perón in 1974 y and Eva Perón in 1953.
The outpouring of grief was not limited to Argentina however. The Guardian has photographs of homages from around the world, and Infobae of Argentine fans saying goodbye.
Maradona is revered for is soccer skills, but also for his larger than life personality off the pitch. For Argentines and others abroad, he has come to symbolize "Argentineness" itself, as any Argentine who has ever taken a taxi in another country can attest to. "Diego Maradona was a passport ... that opened worlds, a noun that never needed translation, a country's definitive surname," writes Alejandro Wall in the Post Opinión. "His story is the story of inequality in Argentina and Latin America."
He was an iconic figure whose excesses rivaled his talents. "No other player has ever inspired such fierce devotion," writes Rory Smith in the New York Times. "He was, in Argentina and beyond, simply “D10S,” a mixture of the number he wore and the word for God in Spanish," notes the Washington Post.
Marcela Mora y Araujo's obituary in the Guardian is eloquent: "Diego Maradona was one of the most intelligent and astute beings to have graced the game. He was a perfect embodiment of the human ability to be contradictory, to do and convey ugly and beautiful at once, good and evil in the same stroke. His celebrity was not separate from his private self – he was achingly human in every way, yet a superstar at all times."
Many of his pithy frases have entered the quotidian Argentine lexicon. (BBC)
A lot of articles: Wall Street Journal, Washington Post, pretty much the entirety of Argentine media. 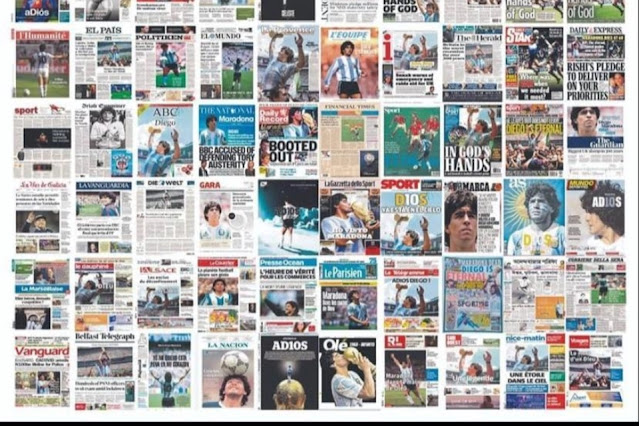 Hurricanes could contribute to a migration surge (Nov. 25, 2020)

Massive hurricane destruction this month in Central America has compounded economic devastation from the pandemic and long droughts. The situation expected to spur many vulnerable populations to seek alternatives elsewhere. Tens of thousands of Central Americans remain in shelters after the Eta-Iota destruction of their communities, but those along the migration route have already started to see storm victims begin to trickle north, reports the Associated Press.

Felipe Del Cid, Americas chief of operations for the Red Cross, described a “triple emergency” in countries like Honduras and Guatemala, referring to Eta, the pandemic and the years-long drought that has made even subsistence agriculture impossible across a long swath of the region. He said the Red Cross was preparing for internal displacement, as well as migration to other countries.

U.S. president-elect Joe Biden's promise to reverse many of the current Trump administration's most controversial measures could add to a potential mass migration, according to some experts. "There are very real risks that sudden changes in policy could generate a surge of unauthorized migration," warned Andrew Selee of the Migration Policy Institute in an Americas Quarterly piece last week.
"Absent a short-term fix, the region is likely to see more migration as damage from the hurricanes makes a difficult region in which to live yet more uninhabitable," warns a Los Angeles Times editorial. Even before this month's storms, some experts were warning that a potential migration surge could be an early test for the incoming Biden administration. (See Oct. 29's briefs.)
Because of this, experts don't believe Biden will take drastic measures right off the bat. They also warn that policies in Mexico and Guatemala to stop migrant caravans are unlikely to change immediately. "It is likely that the new U.S. administration will have to maintain the CDC order for summary expulsions, at least for a few weeks or months, while also relying on the Mexican and Central American governments to limit the movement of caravans through their territory – but they must immediately begin to construct a new regional architecture for managing migration," writes Seele.
More Migration

Thousands of Guatemalans protested against President Alejandro Giammattei and the legislature for approving a budget that cut educational and health spending this weekend. Hundreds broke into the National Assembly building on Saturday and set it on fire, and an estimated 7,000 people gathered peacefully in Guatemala city marches. Police arrested more than 20 people and almost 50 were sent to hospital injured, one of them in a serious condition.

The head of Congress announced today that the controversial budget will not be sent to Giammattei for signature and will not come into force.
Protesters were incensed by the budget that reduced spending on health and education but increased lawmakers' meal stipends. The proposal would also gut funding to combat malnutrition and slashed funding for the judiciary. Discontent had been growing for days in relation to the 2021 budget, which was negotiated in secret and approved by the congress before dawn Wednesday. Protesters say lawmakers schemed while Guatemalans were distracted by back-to-back hurricanes and the Covid-19 pandemic.
The indignation harkens back to 2015 protests that toppled then president Otto Pérez Molina, but there is an added component of exhaustion and irritation about the country's trajectory, explains Plaza Pública in an in-depth piece on the protests.
“It was a devious blow to the people because Guatemala was between natural disasters, there are signs of government corruption, clientelism in the humanitarian aid,” said Jordan Rodas, the country’s human rights prosecutor.
The budget lawmakers passed was almost $13 billion, the largest in the country's history. But, analysts say a third of the budget will need to be financed by debt, and most of the funds will go to infrastructure tied to big business which has angered citizens that point to the country's high level of poverty.

The Roman Catholic Church leadership in Guatemala called on Giammattei to veto the budget. On Friday, Vice President Guillermo Castillo said in a news conference that he had “little communication with the president” and offered to resign, but only if Giammattei stepped down with him.
(Associated Press, New York Times, AFP, BBC)
More Guatemala
News Briefs
Brazil
Venezuela
Regional
Colombia
Eclipse
Did I miss something, get something wrong, or do you have a different take? Let me know ...
Latin America Daily Briefing
Posted by Latin America Daily Briefing at 9:35 AM 1 comment:

Mexico's senate passed a bill yesterday that would make Mexico the third country in the world, after Uruguay and Canada, to legalise cannabis for recreational use nationwide. The bill passed by a landslide 82 votes in favor, and now passes to the Chamber of Deputies. Lawmakers are on a mid-December deadline to create a regulatory framework: The Supreme Court ruled in 2018 that recreational marijuana should be permitted, just one year after lawmakers legalized it for medicinal use.

The bill would let users carry up to 28 grams and grow as many as four plants at home. Sales to adults in authorized businesses would be allowed, provided the product abides by maximum levels of psychoactive ingredients.
Advocates were concerned that the proposals under consideration favors private companies over individual consumers. Clauses maintain criminalization of users, warn activists.
(Reuters, Animal Político, Washington Post)
Advocates have argued that the legalization would dent the black market, in addition to the public health angle. But the move could have risky secondary effects, such as provoking cartel violence and diversification, warns the Economist.
News Briefs
Mexico
Peru
Nicaragua
Brazil
Ecuador
Guyana
Argentina
Covid-19
Conspiracies
--
Latin America Daily Briefing
Posted by Latin America Daily Briefing at 9:33 AM 1 comment:

Iota is the strongest hurricane ever to have hit Nicaragua, according to government officials. At least 16 people were killed by the Category 4 storm that hit the country this week, the second major hurricane in two weeks to hit Central America.

In Nicaragua over 62,000 people moved into 683 government shelters following the storm. In Honduras Iota has destroyed many areas largely spared by Eta and increased the flood damage in already stricken areas.
Earlier this month, Eta caused more than 130 deaths as it triggered flash floods and mudslides in parts of Central America and Mexico.
The double hurricane blow compounds Covid-19 pain in the region -- analysts compare the impact to that of 1998 Hurricane Mitch, but this time around international attention and aid are already focused on the pandemic.
(Associated Press, Guardian, CNN)
News Briefs
Venezuela
Mexico
El Salvador
Chile
Peru
Haiti
Ecuador
Colombia
Covid-19
Argentina
Did I miss something, get something wrong, or do you have a different take? Let me know ...
Latin America Daily Briefing
Posted by Latin America Daily Briefing at 12:02 PM 1 comment:

Latin America Daily Briefing is a daily dispatch of news from Latin America and the Caribbean -- a mix of stories from the international and local press, as well as analysis from think tanks, academics and other commentators. It receives support from the Open Society Foundations (OSF), but the selection of news, and the views expressed in the posts, are those of the moderator, and do not necessarily reflect OSF’s institutional positions.

The briefing is put together by Jordana Timerman. Jordana is a freelance reporter and public policy researcher based in Buenos Aires. She holds a Masters in Philosophy and Public Policy from the London School of Economics and a BA in International Relations and History from Tufts University. Her work has appeared in the New York Times, the Atlantic's City Lab, Zocalo Public Square, Time Magazine, the Huffington Post, Foreign Policy, The Nation and Americas Quarterly, among others.