At least 13 people were killed yesterday, in a crackdown on what was billed as a peaceful march in support of mothers of victims of repression, reports El Confidencial. Apparent government supporters opened fire on marchers in Managua, reports the Associated Press. Yesterday was Mothers' Day in Nicaragua.

Though violent confrontations between protesters, security forces and armed government supporters have become commonplace over the past month and a half in Nicaragua, the attack on a large peace oriented manifestation was unexpected according to El Confidencial.

Yesterday's violence comes even as President Daniel Ortega's government agreed to a four person international truth commission to investigate the crackdowns on protests, which have killed over 80 people thus far. The GIEI would be created in agreement with the OAS and in keeping with the Inter-American Commission on Human Rights recommendations, reports El Confidencial separately. (See May 22's briefs.)

The Nicaraguan Episcopal Conference condemned yesterday's violence and said the process of national dialogue, which the organization is mediating, cannot be resumed under these conditions, reports El Confidencial. Bishop Silvio Baéz noted on Twitter that they are not condemning generic violence, but rather "assassinations" carried out by "armed groups in support of the government against the civilian population.

Business leaders in the COSEP association urged Ortega to call early elections yesterday, urging the government to agree on a date with civil society, reports Reuters. In a speech Ortega retorted that Nicaragua "is not private property".

Did I miss something, get something wrong, or do you have a different take?  Let me know ...
Posted by Latin America Daily Briefing at 12:06 PM 3 comments: 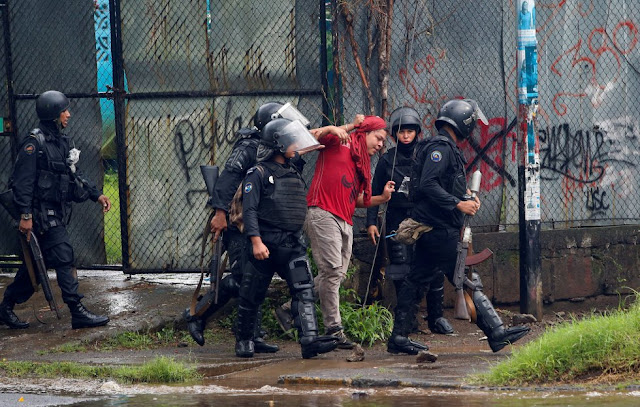 Two people were killed yesterday in Nicaragua, and about 40 wounded, in the midst of confrontations between security forces, armed government supporters and anti-government protesters, reports El Confidencial. It was the bloodiest day since April, when protests led to at least 77 deaths over the course of a week, reports El País. The government ordered a crackdown after students took over the National Engineering University (UNI), up until now controlled by pro-government forces.

The Ortega administration said it would be willing to return to negotiations with the opposition Alianza Cívica. The talks, mediated by the Episcopal Conference, were suspended last week due to lack of progress. (See last Thursday's briefs.)

The "thuggish" response by the government has eroded its traditional pillars of support in the Catholic Church and the business community, reports Reuters. On Sunday the leading private sector association called on businesses to join protests for justice.

EFE denounced that its team was harassed by police while covering repression of protesters who were shot at with rubber bullets.

At Slate, Cintia Membreño gives a first person account of how the Ortega administration has alienated youths. 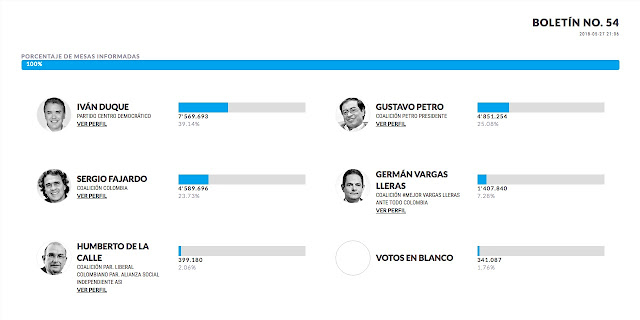 ​
Colombian voters divided their backing between the right and left wing candidates yesterday -- setting the stage for a polarized second round of presidential voting next month. Conservative senator Iván Duque came in first, with just over 39 percent of the vote. He did not however obtain enough votes to win outright, and will face off on June 17 against former Bogotá mayor Gustavo Petro, who obtained 25 percent of the vote yesterday. Centrist Sergio Fajardo came in close behind, with 23 percent. He far outperformed polls, which had him at a distant 15 percent. (See last Thursday's post.)

La Silla Vacía has the complete results for each candidate and broken down geographically. El Tiempo notes the record participation levels, surpassing 50 percent.

Duque and Petro beat out more centrist options, making the run-off a polarized competition between a candidate closely associated to former president Álvaro Uribe -- with a questionable human rights track record, and champion of the country's "war on drugs" -- and a former guerrilla.

Though Duque is expected to win handily, it's a face-off that would have been impossible before the signing of the 2016 peace accord with the FARC, say many observers. The guerrilla demobilization seems to have created an opening for the political left that was non-existent till now, notes Michael Shifter in the New York Times.

It's a historic run-off in a country where the left hasn't had a real shot at the presidency since Jorge Eliécer Gaitán was assassinated in 1948, reports the Washington Post.

The two will now be competing for the centrist vote, particularly Fajardo's electorate, while angling to not alienate their own bases, according to the Wall Street Journal. Duque will likely exploit the specter of Chavismo in order to scare voters towards him, while Petro's supporters will aim to portray Duque as an Uribe puppet. Both candidates made nods to Fajardo's campaign in their speeches yesterday. Petro, for example, focused on education, notes la Silla Vacía.

Though Duque is Uribe's protege, his support yesterday outstripped the former president's results in legislative voting earlier this year, and his own results in an open primary -- a successful result of building a broader coalition outside of traditional Uribismo, according to la Silla Vacía.

A separate Silla Vacía article focuses on Petro's campaign, and unprecedented success as a voice of leftist causes and disenchantment with traditional political elites. He has channeled the anti-establishment fervor noted in other elections in the region, wrote Cynthia Arnson and Jamie Shenk in an Americas Quarterly piece from before the election.

Though the leading candidates had divergent views on the divisive peace deal with the FARC, the presidential campaign didn't focus much on the peace deal itself, which was somewhat of a surprise for some observers. Most voters were more concerned with corruption, unemployment, health care and education, according to opinion polls. A March survey found that only 3 percent of Colombians considered implementation of the peace accord a top priority.

Nonetheless, the legacy of the deal -- and the security challenges that have arisen in the wake of the FARC demobilization -- will be a key challenge for the next president, notes the AQ piece.

A final presidential debate on Friday did focus on the accord, however. Duque said it had "bamboozled the Colombians," while Petro countered: "The peace is not a problem of negotiation with the guerrillas, but an agreement with society to live without violence," reports the Guardian.

Duque has promised not to "tear up" the accord, but to water it down. He will seek changes to ensure that drug trafficking is not an amnestied crime and that guerrilla leaders who haven’t made reparations to victims are barred from political office, reports the Associated Press.

Posted by Latin America Daily Briefing at 10:01 AM 1 comment:

Colombians head to the polls Sunday to pick a new president from five contenders. Iván Duque, anointed successor to former President Álvaro Uribe and opponent to the FARC peace deal is in the lead, though likely no candidate will obtain enough votes to avoid heading to a run-off vote in June.

Duque is projected to win about 41.5 percent, and his primary opponent is leftist former Bogotá mayor Gustavo Petro, with a predicted 29.5, reports Reuters. They are trailed in opinion polls by center-right ex-Vice President Germán Vargas Lleras, the center-left former Medellín Mayor Sergio Fajardo, and lead FARC peace negotiator Humberto de la Calle. As of the most recent polls, Duque would likely win in a second round of voting as well.

Americas Society/Council of the Americas has a roundup of all the polling, with the big caveat that predictions are notoriously unreliable in Colombia. (Anybody else recall choking on a sip of coffee the morning after the peace deal referendum?)

La Silla Vacía analyzes how voters will lean according to their votes in this year's legislative elections -- a method which puts Germán Vargas Lleras, who resigned as vice president to run, in the lead, followed by Duque.

Most experts are surprised Petro, a former guerrilla, is even in the running, much less polling second, reports the Washington Post. For some, it's a sign of changing attitudes in the wake of the FARC peace process, reports the Guardian. The demobilization means the left has an opportunity for political play. Petro's found popularity as an economically progressive alternative to Duque's market friendly approach -- launching what might be called the great avocado vs oil debate -- reports Bloomberg, a more politically palatable expression of of the discontent previously expressed by the FARC.

In response, Duque is angling for centrist votes, but -- at least in the first round -- carries the burden of a strong portion of voters who reject Uribismo, reports la Silla Vacía.

Polarization is a theme of the election analysis, as is the issue of misinformation. Open Democracy has a section dedicated to the issue, produced with Nueva Sociedad and Friedrich Ebert Siftung.

In a piece delving into the issue of polarization, Sandra Borda analyzes two potential factors: "... that the peace process produced a counterintuitive effect: instead of uniting Colombian society around a common objective, it served only to profoundly divide in an almost irreconcilable way. ... My second argument suggests that we may be confusing polarisation with a phenomenon that appears similar but is also very different. I suggest that the end of the war with the FARC, a revolutionary Marxist guerrilla, opened up the political space for the left that had been politically locked away in the past and has now increased the political ideological spectrum within which Colombian electoral politics functions."

InSight Crime compares the candidates' actual proposals, noting the importance of new criminal dynamics in the wake of the FARC's demobilization.

Ahead of Sunday's vote, authorities insisted that there is no possibility of electoral fraude, reports El Tiempo, in response to Petro's allegations that electoral software has not been adequately audited.

Whoever wins will face an uphill political battle, warns Reuters. While Petro's plans to raise social spending have scared investors, even Duque's business-friendly plan to cut taxes is bad for the budget.

Wrapping up, Carlos Cortés' irreverent La Mesa del Centro round up of the candidates heading into the vote is well worth a few minutes.

Latin America Daily Briefing is a daily dispatch of news from Latin America and the Caribbean -- a mix of stories from the international and local press, as well as analysis from think tanks, academics and other commentators. It receives support from the Open Society Foundations (OSF), but the selection of news, and the views expressed in the posts, are those of the moderator, and do not necessarily reflect OSF’s institutional positions.

The briefing is put together by Jordana Timerman. Jordana is a freelance reporter and public policy researcher based in Buenos Aires. She holds a Masters in Philosophy and Public Policy from the London School of Economics and a BA in International Relations and History from Tufts University. Her work has appeared in the New York Times, the Atlantic's City Lab, Zocalo Public Square, Time Magazine, the Huffington Post, Foreign Policy, The Nation and Americas Quarterly, among others.